As I made my way to the Blue Mountains, I was caught is a a torrential downpour and I held a fear that Louise and Ben’s wedding ceremony on the grounds of Yester Grange would be washed out. But except for a slight drizzle about forty minutes prior to the ceremony it turned out to be a fantastic day with the sun breaking through the clouds and shining as bright as the love this beautiful couple have for each other.

Louise and Ben live in Singapore, but unfortunately due to the festive season and time constraints after arriving in Sydney, there was no opportunity to meet up with them (as is my preference) before the wedding. Well what a really delightful couple they are and so very very much in love. The constant acts of affection towards each other and the constant smiles on their faces openly displayed their extreme happiness. 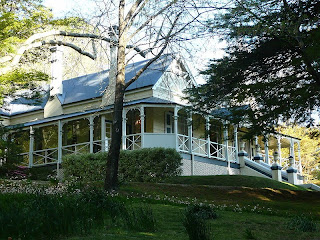 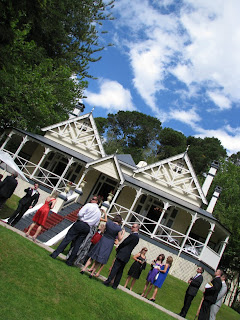 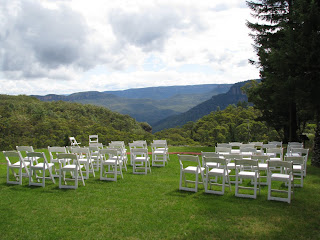 Yester Grange is nestled in 10 acres of totally private parkland and gardens at the top of Wentworth Falls waterfall, the rolling expanse of green lawn reaches from the magnificent Victorian mansion, to touch the thousands of hectares of World Heritage Listed Blue Mountains Wilderness that lies beyond – the perfect backdrop for this ceremony and celebration.

Preceded by her bridesmaids, Louise, accompanied by her Dad, Ross made their way down the Yester Grange steps and to the ceremony area where Ben and the groomsmen awaited. A very beautiful ceremony, officiated by Susan Artup followed – much to the delight of the 115 guests (some which had traveled from Singapore and the US). 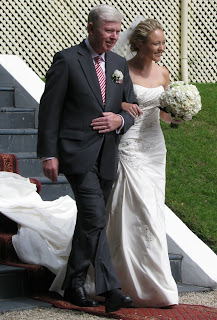 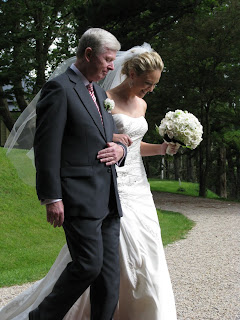 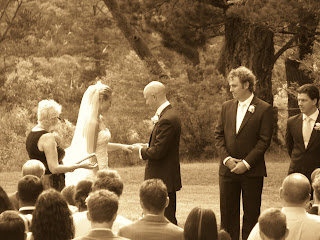 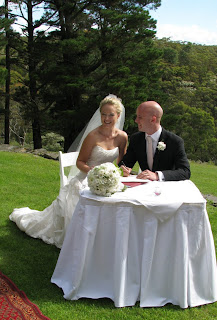 Showered with rose petals as they made their way back down the aisle, the joy that they felt finally being married filled the entire valley. While Louise, Ben and the wedding party wandered around the grounds for photographs, the guests enjoyed refreshments, the beginning of the cocktail food, music by Simon & Glenn on Violin & acoustic guitar and the breathtaking view. 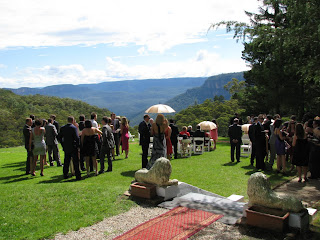 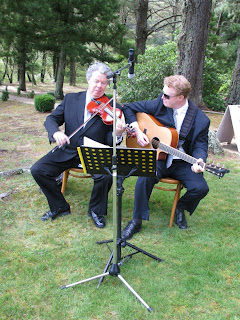 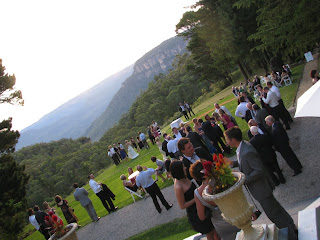 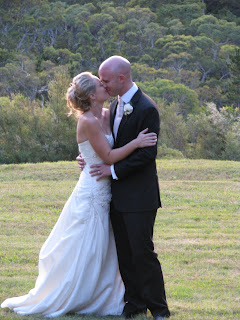 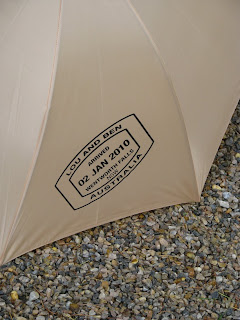 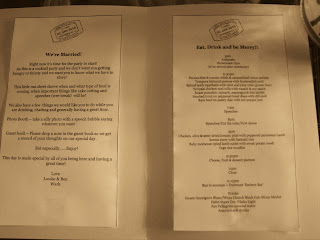 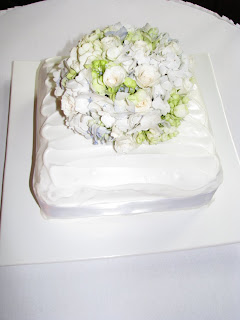 Ben’s step-father David Stratton, who was the Master of Ceremonies, asked the guests to gather in the ballroom for the first set of speeches. First up were Louise’s Mum & Dad, Jennifer and Ross who recounted the Louise and Ben Love Story in the form of a fairytale being read from…….a book of fairytales! Next up were Ben’s parents, Susie and Brian – who both expressed the elation they felt for this perfect match. A short recess followed where guests were able to mingle and socialise in the many areas of Yester Grange or even take a silly picture in the photo booth! 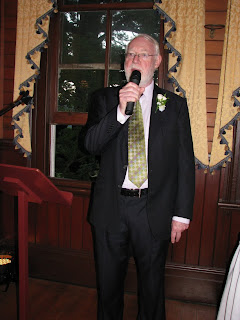 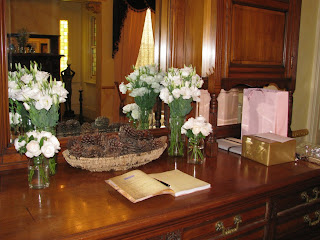 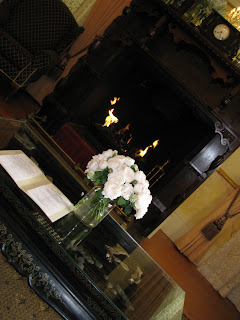 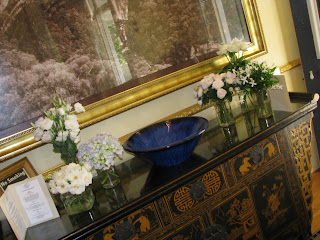 Following a spectacular sunset, David once again gathered the guests in the ballroom for the concluding speeches, first Louise, then grooms men Julian & James, followed by best man Chris and finally Ben. The speeches were heartfelt, humorous, each very special in their own way and enjoyed by all.

The cutting of the cake followed and then it was time for the first dance. Midway through Louise and Ben were joined by the wedding party. At the conclusion of this song guests were invited to join in and it was certainly party time!!! (as can be witnessed in the video clips at the end of this post).

As Ben had proposed to Louise in New York, for the last dance they selected New York, New York by Frank Sinatra. As you can see in the portion of video I captured, surround by family and friends they were having the time of their life right up till the very last minute of their special day. 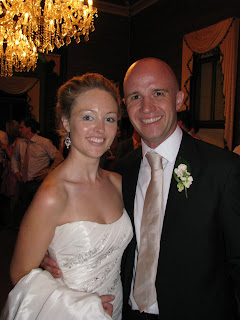 Louise and Ben, I thank you for giving me the great honour and privilege of allowing me to be a part of one of the most significant days in your entire life. It was an absolute pleasure and joy to meet you and contribute to the memories you will always hold of this day. May love and music fill your lives forever!!!

Register Signing: “All You Need Is Love” performed by Simon & Glenn on Violin & Guitar

Recessional: “Stand By Me” performed by Simon & Glenn on Violin & Guitar

Cake Cutting Song: “How Sweet It Is” by James Taylor

Bridal Waltz/First Dance: “Can’t Keep My Eyes Off You” by Andy Williams 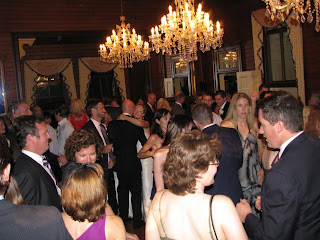 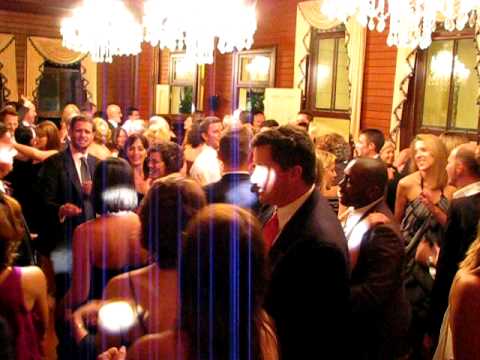 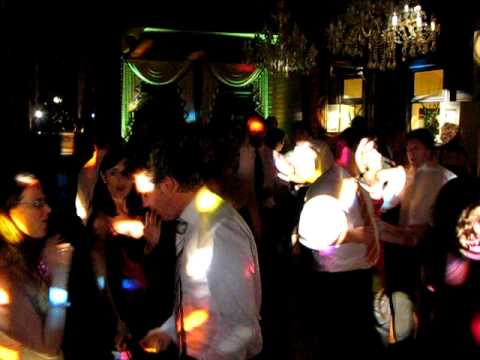 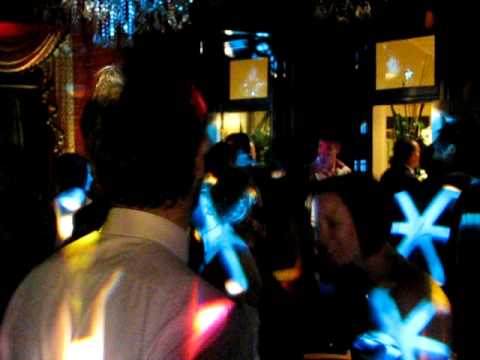 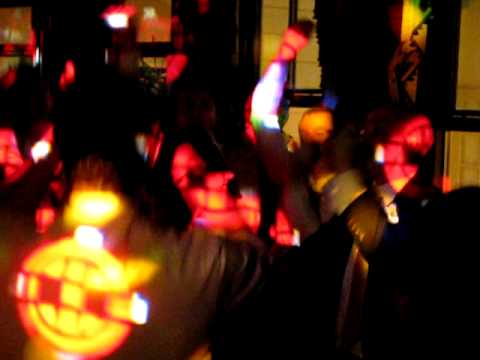 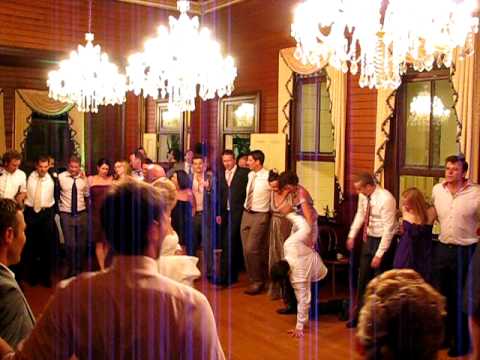