In the days leading up to Hollie and Zane’s wedding, there had been so much rain that there were fears that not only would the ceremony not be able to be held on the grounds of Riverside Oaks, but worse still, that the roads would be flooded and guests would be unable to access the venue. In the end, all prayers were answered and it was an absolutely gorgeous day – just perfect for this fabulous couple to be united in marriage and to celebrate with family and friends. 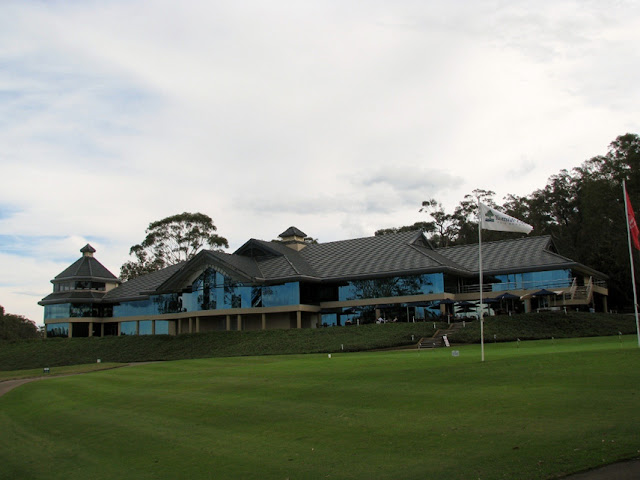 At 4:00 pm, the 120 guests gathered for the ceremony at the 19th hole of the golf course. Zane, twin brother, Kurt and younger brother, James, waited for Hollie and the bridesmaids to arrive. Just a touch late, Helicia, Bethany and Hollie made their walk down the aisle. A simple and beautiful ceremony, officiated by Heather Ryman, followed before Hollie and Zane were pronounced the new Mr & Mrs Baker. 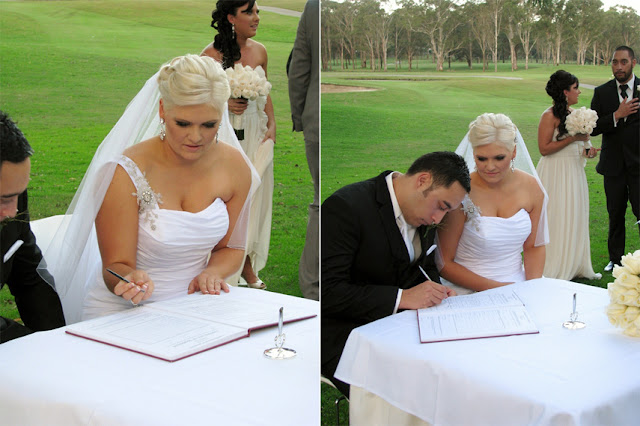 With the light beginning to fade, Hollie, Zane and the wedding party jumped on some golf buggies and headed off for photographs around the spectacular Riverside Oaks grounds whilst guests adjourned to the Terrace Bar for refreshments. A short time later, guests made their way up to the function area for more refreshments and canapes. The room looked fabulous, with picturesque views over the golf course. Not only was the room beautifully decorated by Hollie herself, but she also put the Candy Bar together (it was certainly popular) – great job Hollie!!

Guests seated and comfortable, it was time to commence proceedings and welcome the parents, wedding party and our ever so happy couple. A very beautiful welcome and thank you from Hollie and Zane, firstly thanking those that had traveled from New Zealand, Western Australia and Queensland. They then explained to the guests why they had been invited and how special each and everyone of them was to the both of them and ended with, if I may paraphrase, “…when we look around the room, we see memories. Some from before we even knew how to tie our shoelaces and some from just this week. What we would like to ask of you, is to continue to make memories with us. Be a part of our lives not only as individuals, but as a married couple and more importantly, as a family with our beautiful daughter, Alba”.

Everybody was then served a scrumptious entree and main meal, before we proceeded with the cutting of the wedding cake. Dessert was served and then it was time for the speeches. Lovely speeches from Hollie’s Dad Michael, Zane’s Dad Phillip, a song from Zane’s Mum Myrna, sister’s, Serena and Janelle, and Zane’s brother’s girlfriend Jordana, before we heard from bridesmaid Bethany, Best Man Kurt and finally Zane. Zane and Kurt then performed a Haka and this was followed by Hollie and Zane’s first dance. It was now party time and boy did everybody party! A while later, following the bouquet and garter toss, Hollie shared a special dance with her Dad Michael. Guests were then invited to join Hollie and Zane for a farewell dance after which they both departed to start their new married life together.

When I first met Hollie and Zane, they shared the story of how they met, how Zane had proposed, the hopes and dreams they have for their future and what was important to them about their wedding day. Hollie and Zane, I believe that your day was as you dreamed it would be. I believe your future will always be full of love, happiness, family and friends.  You are both amazing individuals and along with your beautiful little daughter, Alba, make such an adorable family. Thank you for investing your trust in me and inviting me to be a part of your amazing day. Hollie, Zane and Alba, may love, laughter and music fill your lives forever. 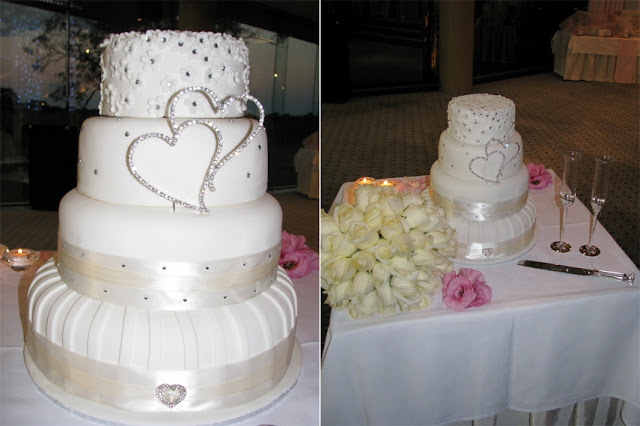 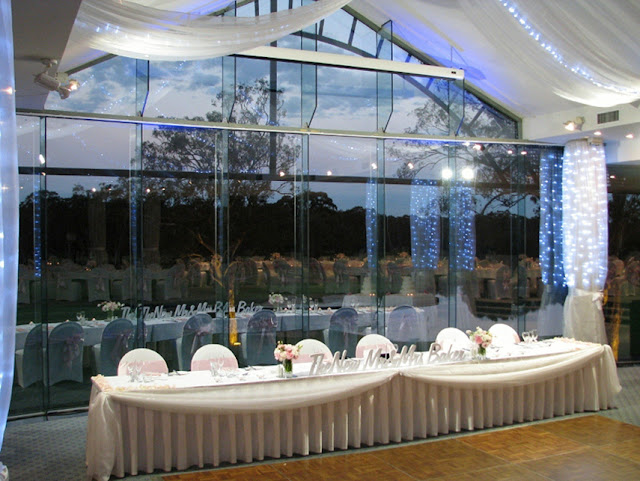 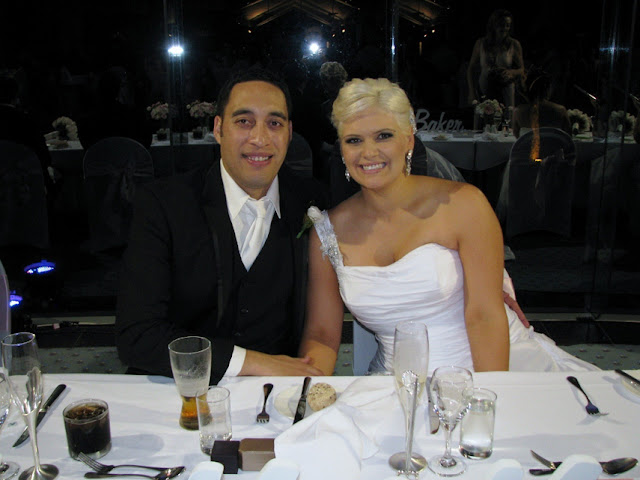 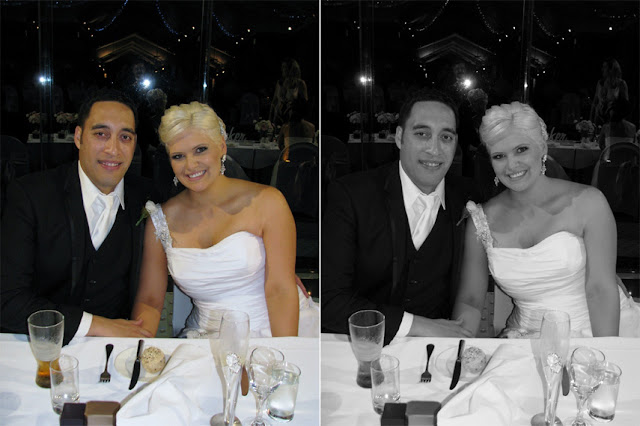 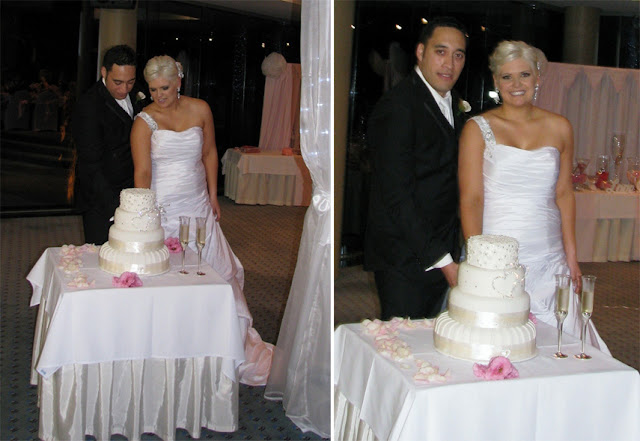 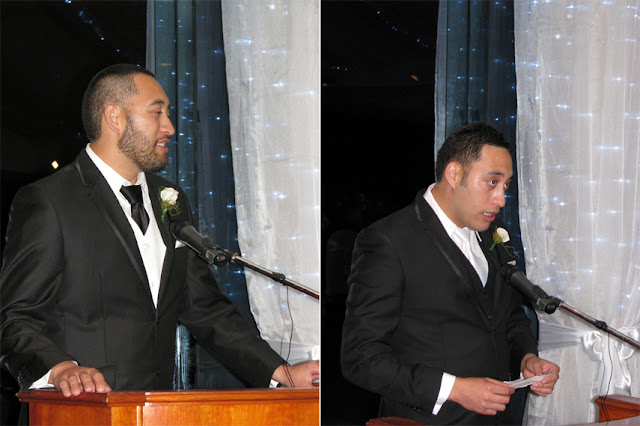 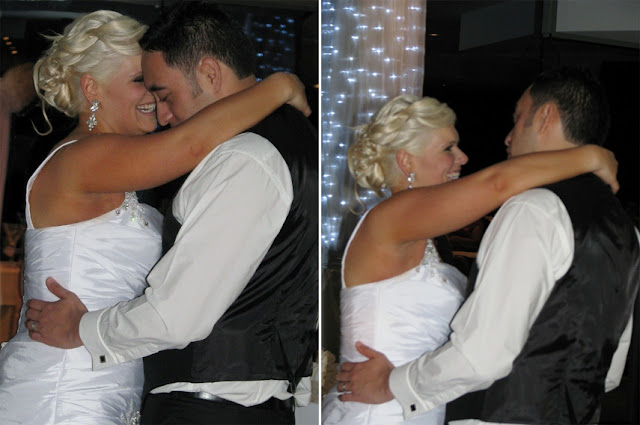 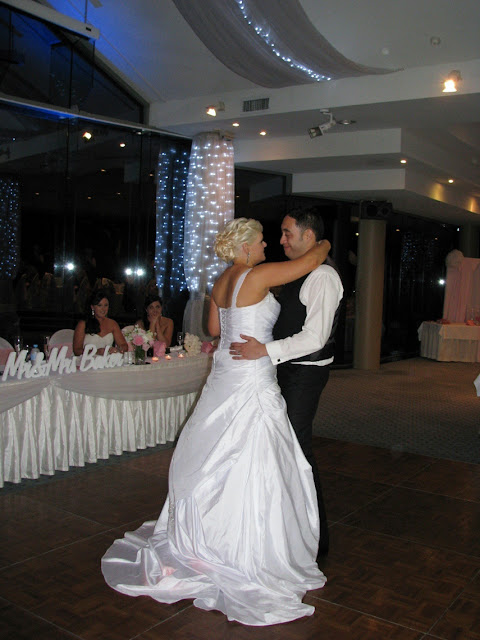 Recessional: “Gotta Be Somebody” by Nickelback

Wedding Party Entry: “Feeling This” by Blink 182, “Bagg Up” by Chingy, “Escape (Pina Colada Song)”  by Rupert Holmes, “Return Of The Mack” by Mark Morrisson

Bride & Groom Entry: “Give Me Everything” by Pitbull Feat. Ne-Yo, Afrojack & Nayer

Garter Toss: “Fever For The Flava” by Hot Action Cop

Final Farewell Song: “Tonight Is The Night” by Outasight 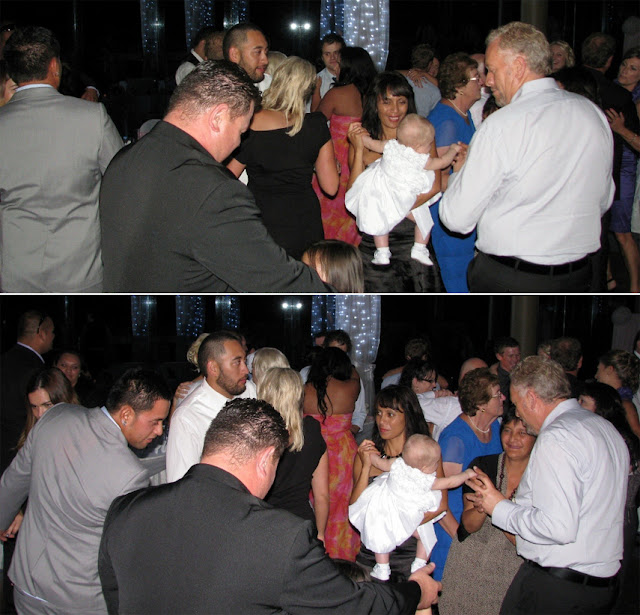 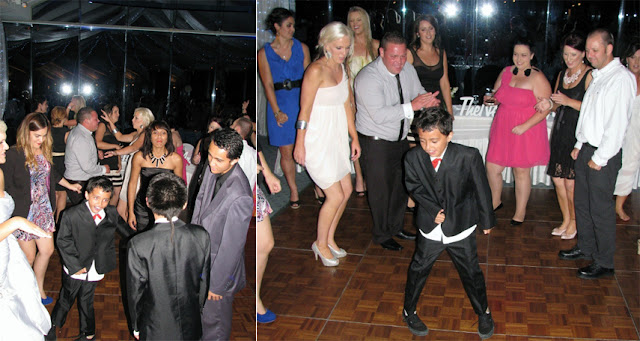 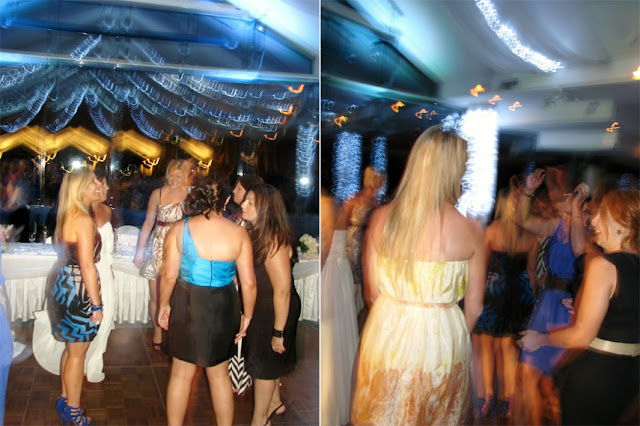 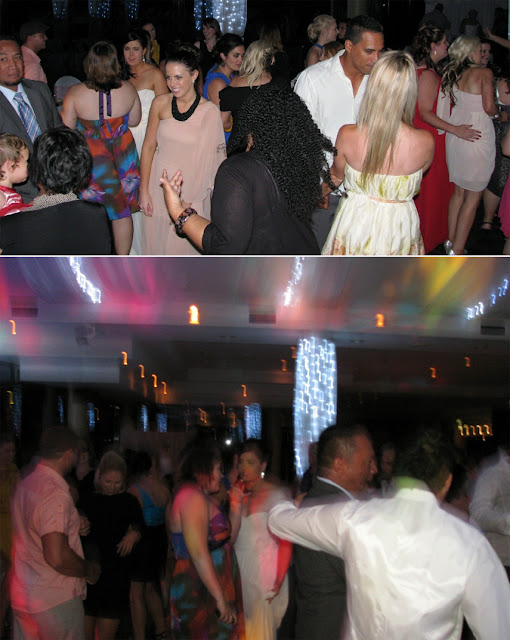 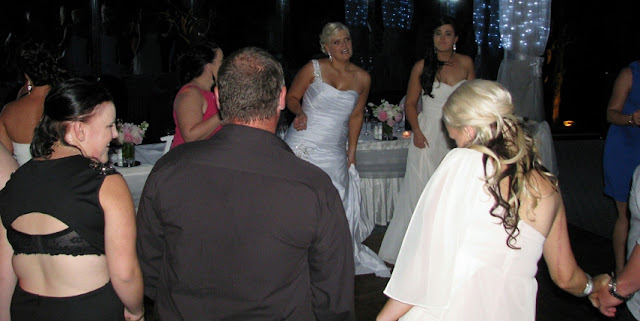 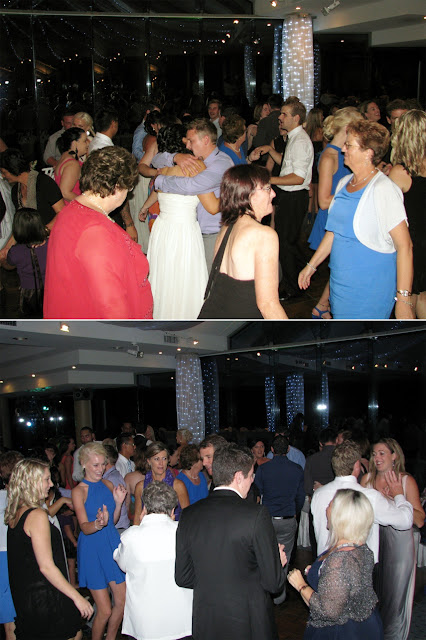 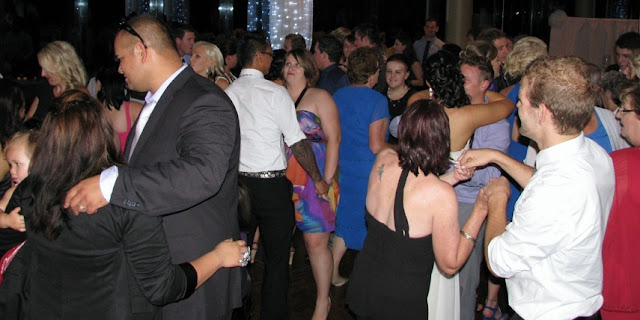 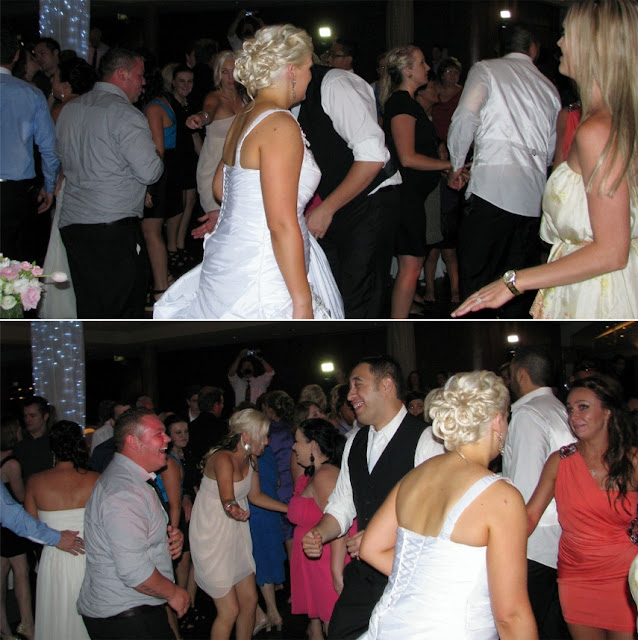